It started to snow today morning. Its normal in our area in winter time. But watching it from my window I realized I have never ever seen such big snow flakes. Really huge. Our local newspaper writes: "So huge flakes in Slovakia last time fell more than a hundred years ago"  It kept snowing throughout the whole day and it is not stopping in moment when I'm writing it. Great for the bonsai trees tough. Snow will additionally protect them from the frost which should come during next few days, according to weather forecast. Kids will enjoy it. We will have great winter weekend, I guess. Wish you nice weekend also, wherever you are. Thanks. 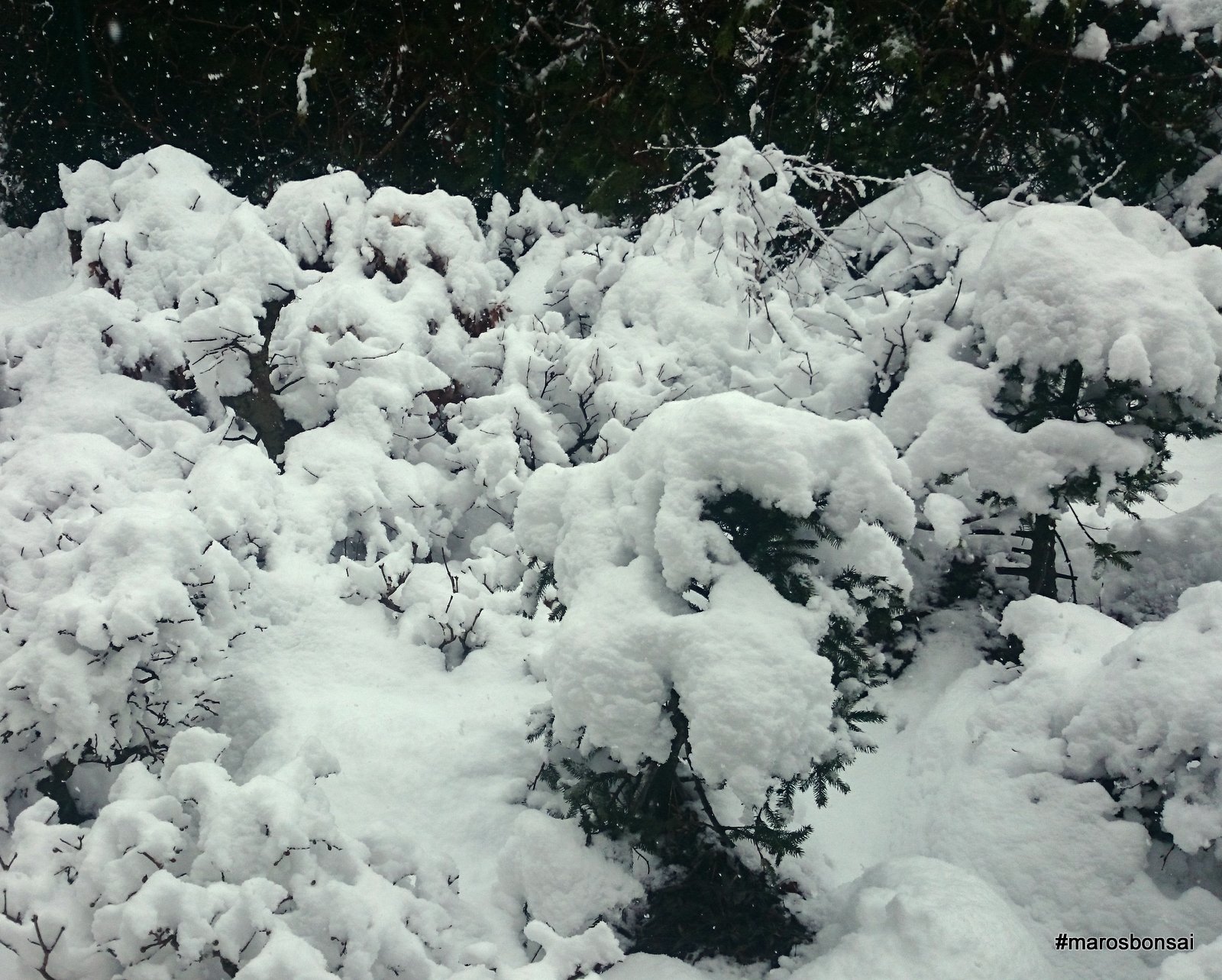 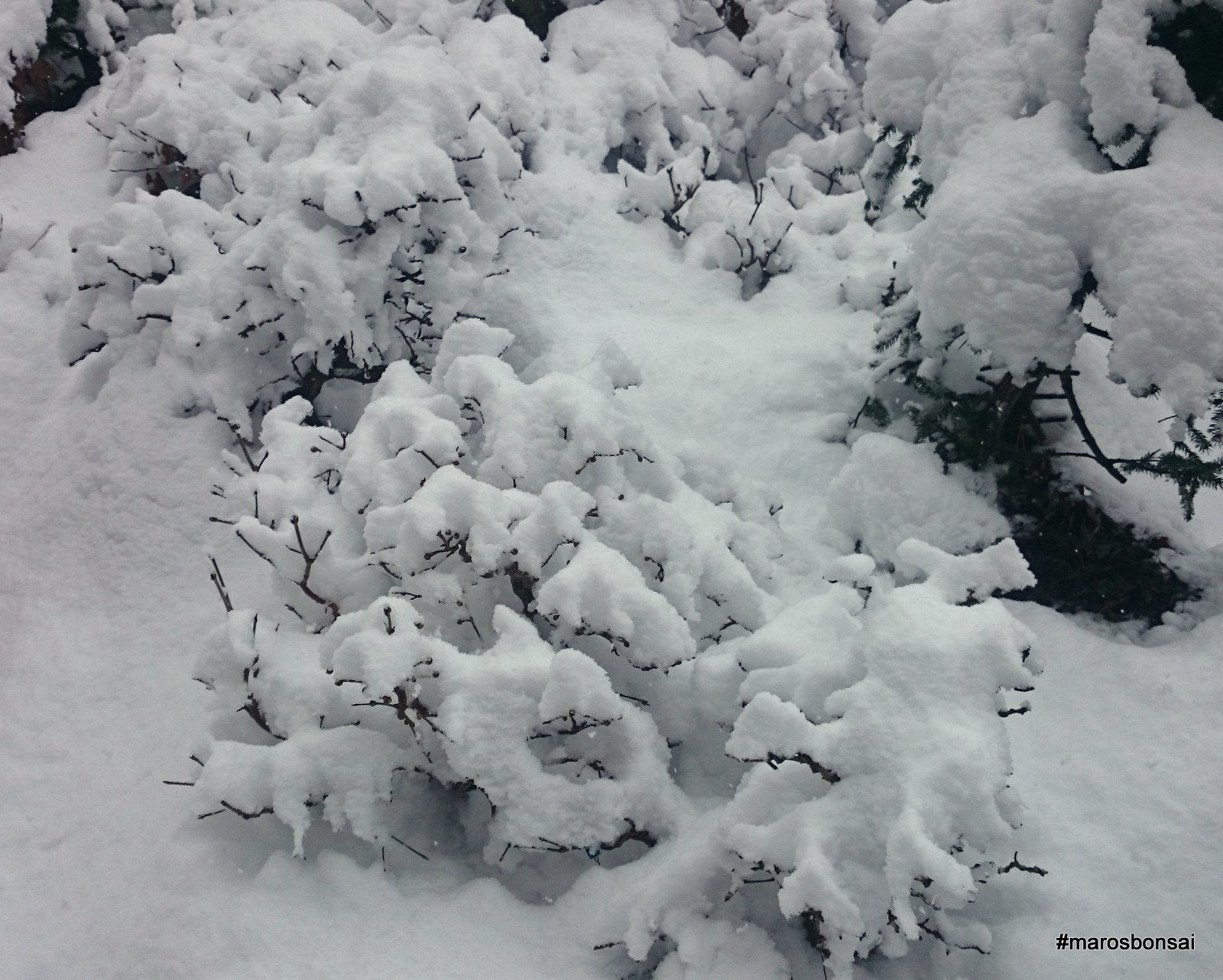 The Yossarian got the white coat

During last days we received our share of the snow. Not too much, and did not last too long, unfortunately for the kids. Hornbeam stayed after wiring session out of its original winter storage temporarily. Moss patch in pot was covered by cloth to protect the moss from the black birds, my biggest enemy on moss front. And than came snow during the night. In the morning I could not resist taking few pictures. Enjoy. 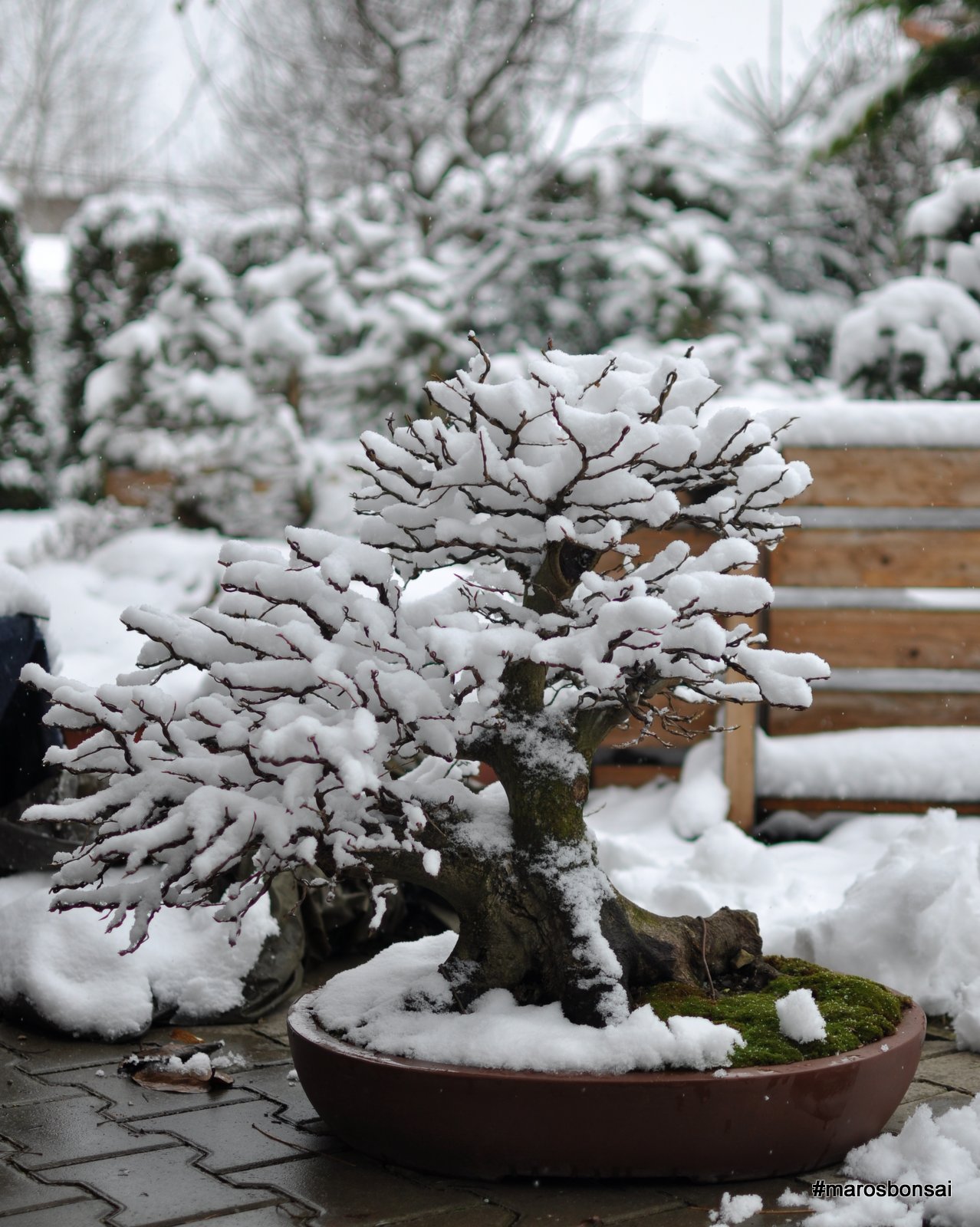 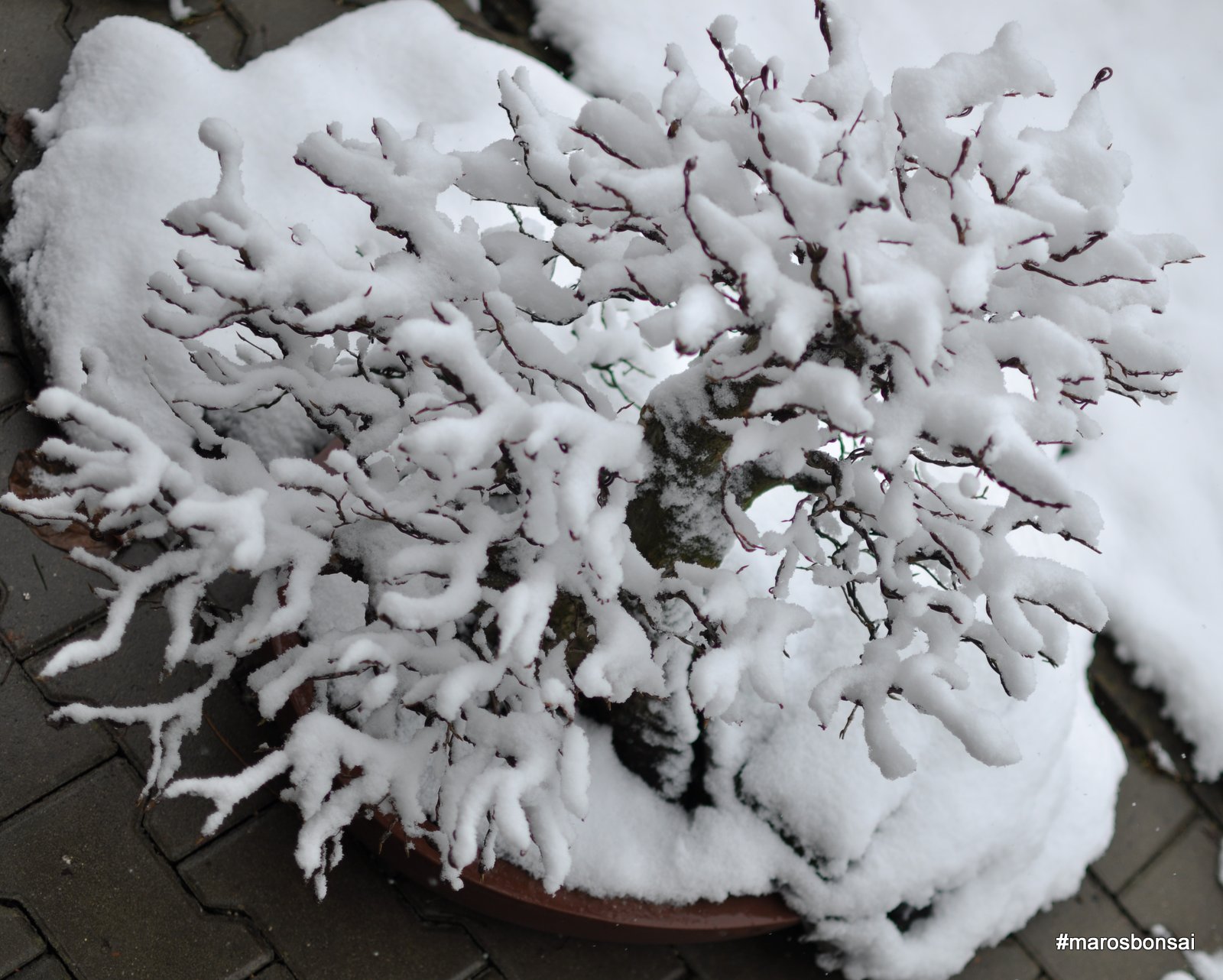 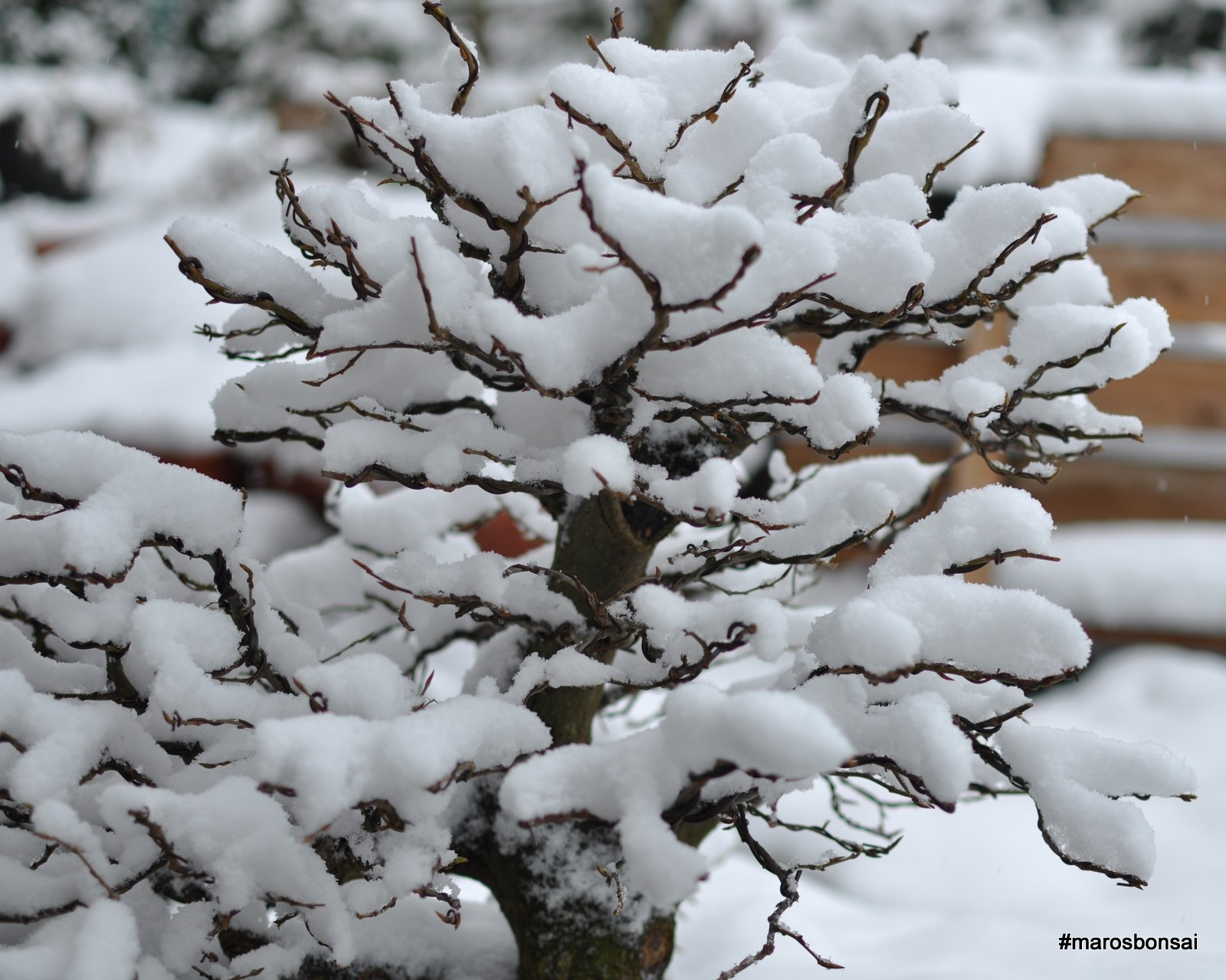 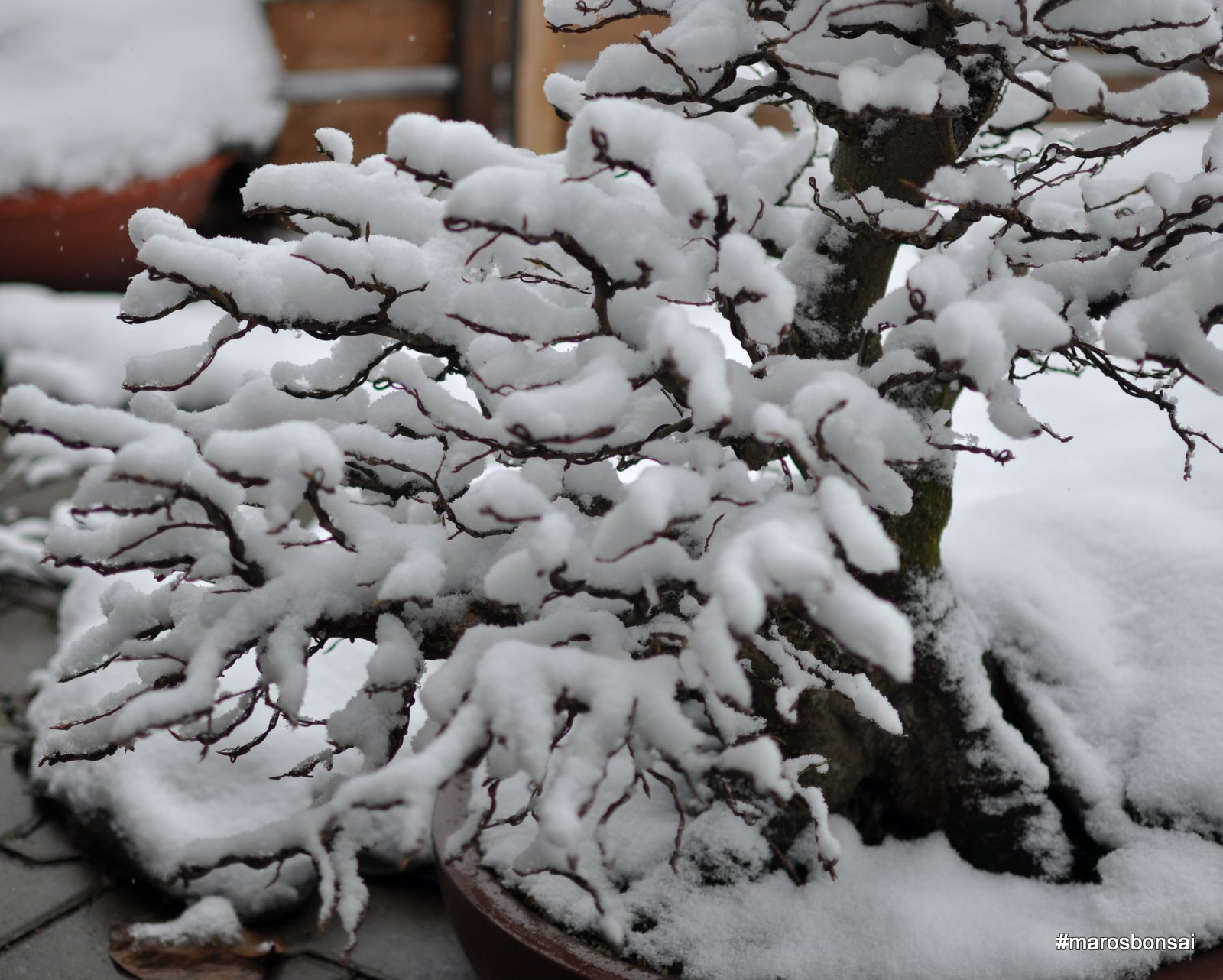 Story of my bonsai tree: Hornbeam No.11 - "The Yossarian"

It was one of the cold days in March 2010 when I went to forest with my backpack filled with diggers tools. When I came on spot there was last patches of snow here and there, but it was clear that spring is inevitably arriving. So I started searching around, and on seep hill side I found this tree which was prepared last year. Actually, I did found two on one spot, approximately 5 meters apart, next to hornbeam No.11 was his bigger brother hornbeam “Wild Boar”.


Trees were on spot where they get hits from bigger and smaller rocks from nearby quarry. And some big rocks were sitting right on the trunk of this tree, as you can see on pictures. Mother nature with help from mining industry formed this yamadori. Digging was relatively easy and tree was out in about an hour. And from first moment I loved this tree. I had a feeling it can be nice bonsai one day.


So the tree is Hornbeam (Carpinus betulus).As quite common with this species it has good nebari. Since it was growing inclined, in hard terrain, and sitting directly on large rock buried below the tree roots are curved downwards.


When brought home it was potted into plastic bowl into mixture of zeolit and rough peat. For this tree I used zeolit in fraction 4-8mm which proved to be good decision retrospectively. Personally I favor this fractions for bigger trees and have better results as with finer mixtures.

So we were safe home and there were only few things which could have been done. Do not move to much, fertilize from first day with combination of organic and chemical fertilizer and water a lot. I tried to place the tree on sunny spot in the garden. I believe it is much better to promote its growth.


When I was thinking about its future structure I was not sure where shorten original branches. Since at that time I was in bonsai for first year it is no big surprise. With such approach I was trying to be on safe side and not to reduce tree to much, knowing I will have to reduce it later, after season or two. It obviously slowed down development of the tree a bit. 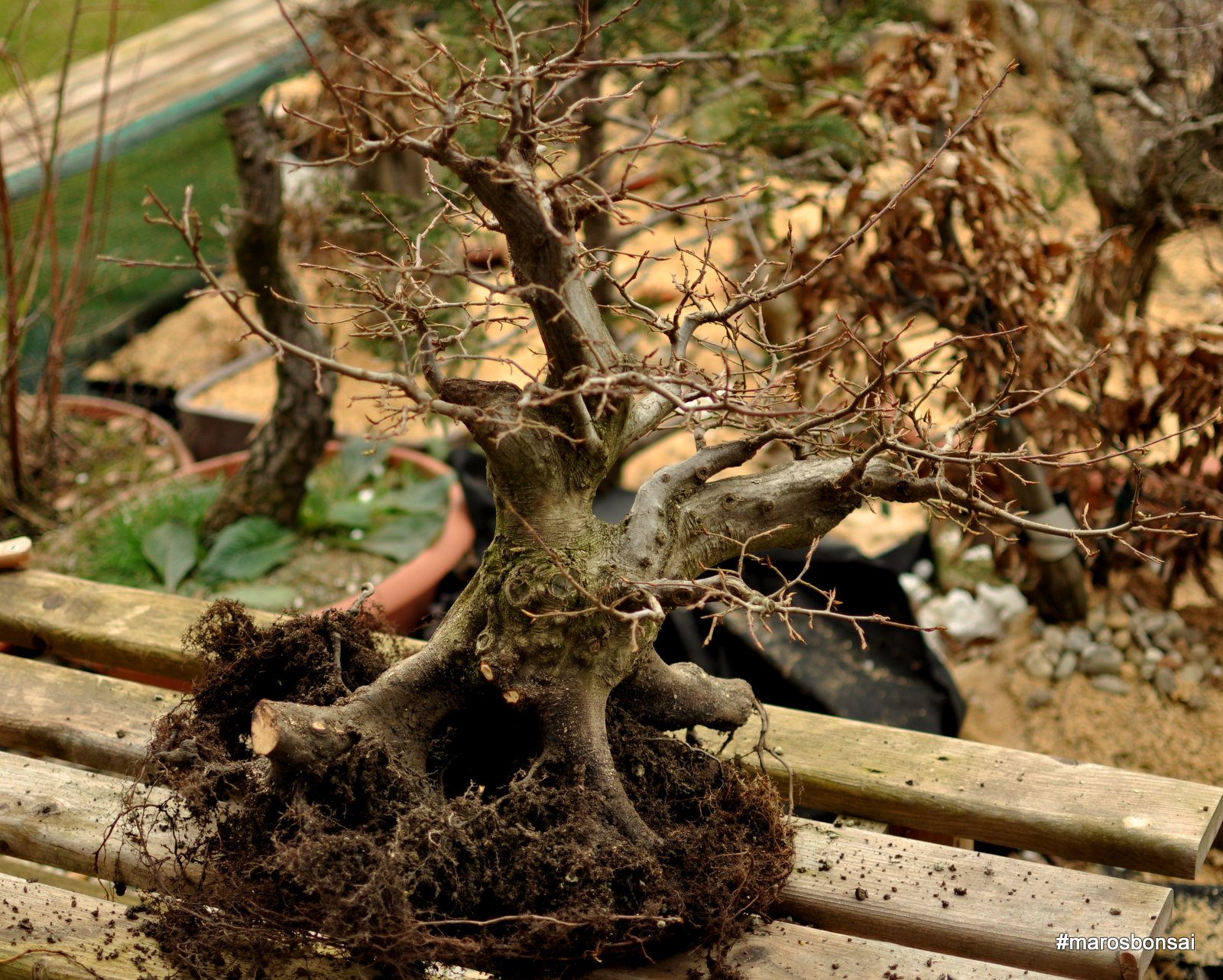 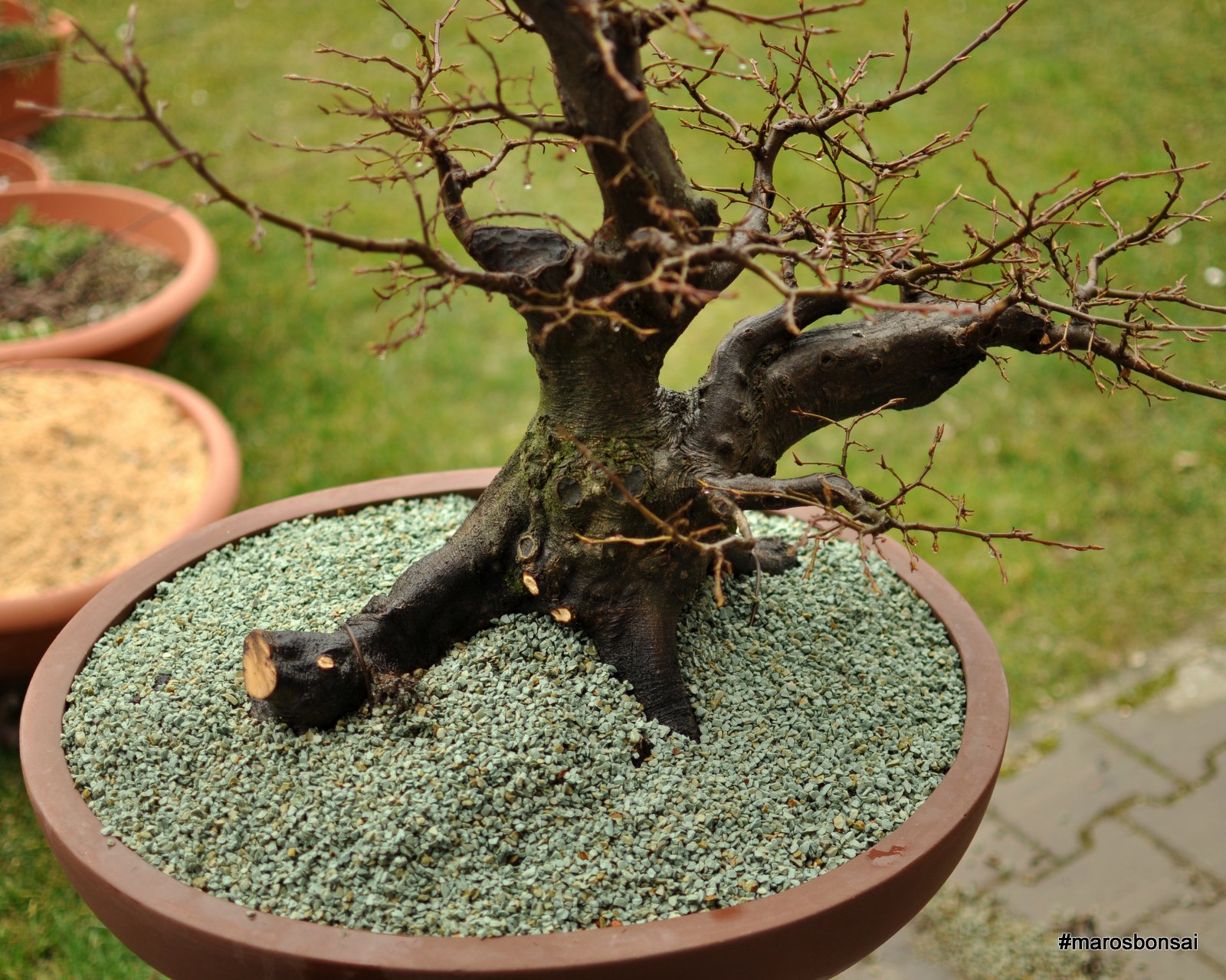 General structure of the tree was discussed with Walter Pall when he was on our workshop, back in 2011. So branches were reduced and later carved to somehow more natural shapes. Last year I let grow long branch which you can see on the picture fixed with wire to the big root. I wanted to increase its thickness. Since it was partially achieved I cut branch off now. New branches, one from top and second from bottom of the original branch are wired and pointed in right direction now. I will let them grow for few seasons undisturbed. This way branch will have much better taper and structure.

Earlier pictures were made with compact camera and therefore they are of lower quality. Newer pictures are made with camera Nikon D90. With D90 I use lenses Nikon35mm f/1.8G, mostly. This lenses are relatively cheap and they are making fantastic pictures, even in bad light conditions.


The tree was several times wired. On the beginning it was easy and fun. Last wiring was done this week, and it was still fun, but not easy task anymore. It was not wired last year and it made whole stuff this week more complicated.


It took me few evenings to do wiring, seen The Godfather 2 and The Matrix Revolutions during the work – pretty long movies, ha?


Personally, I do not expect any extensive wiring in the future, just minor correction maybe. So I will watch much shorter movie (movies?) next time? 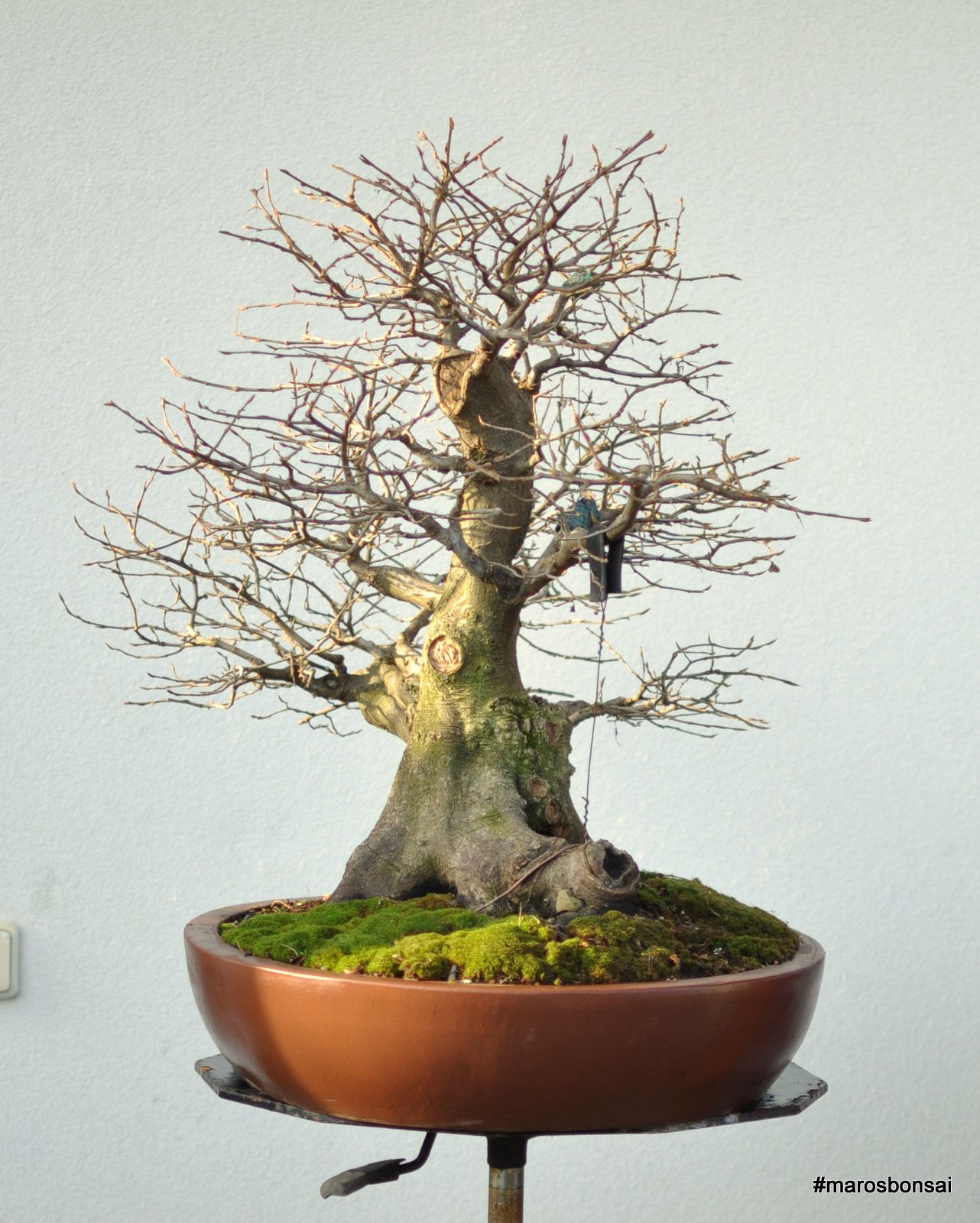 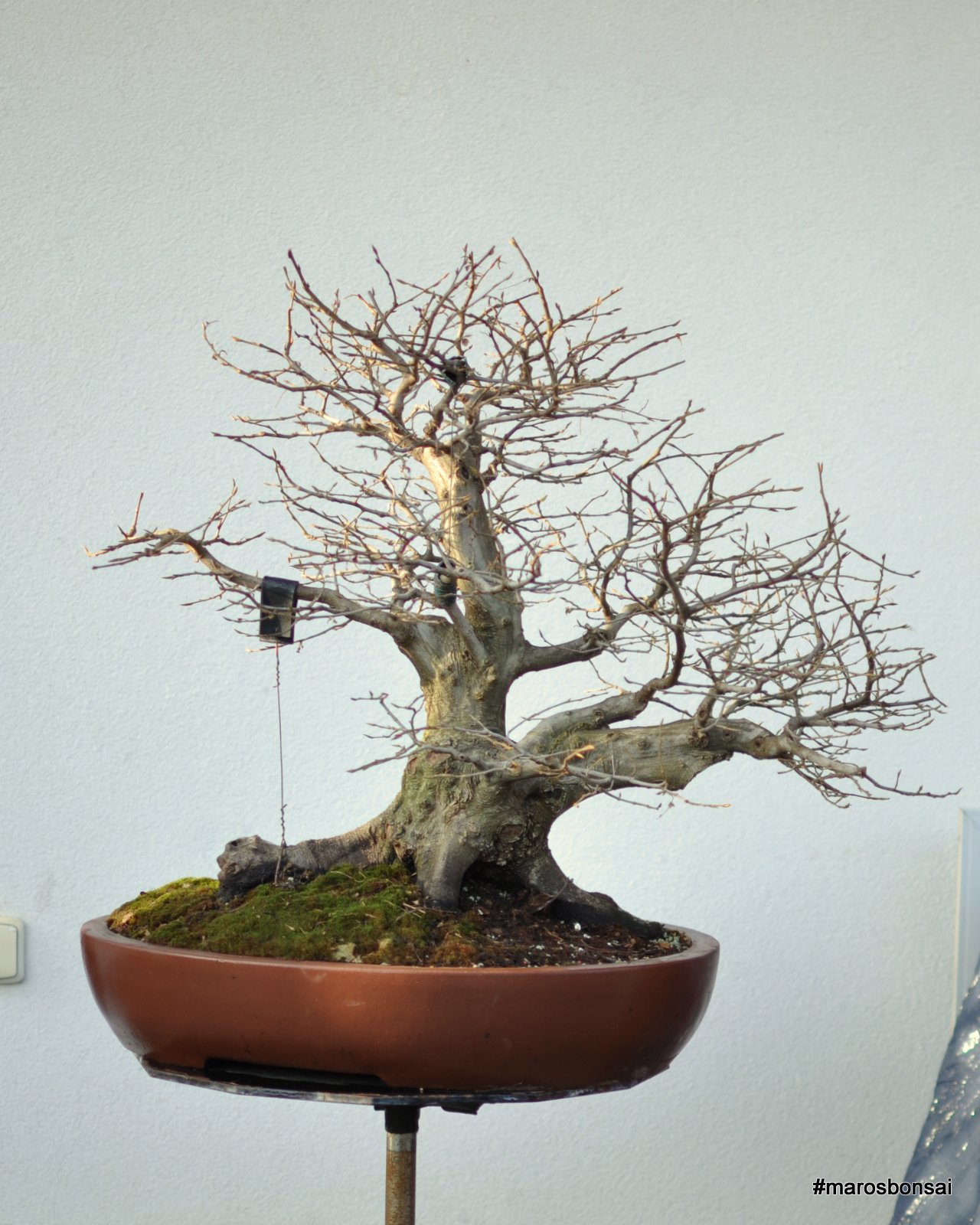 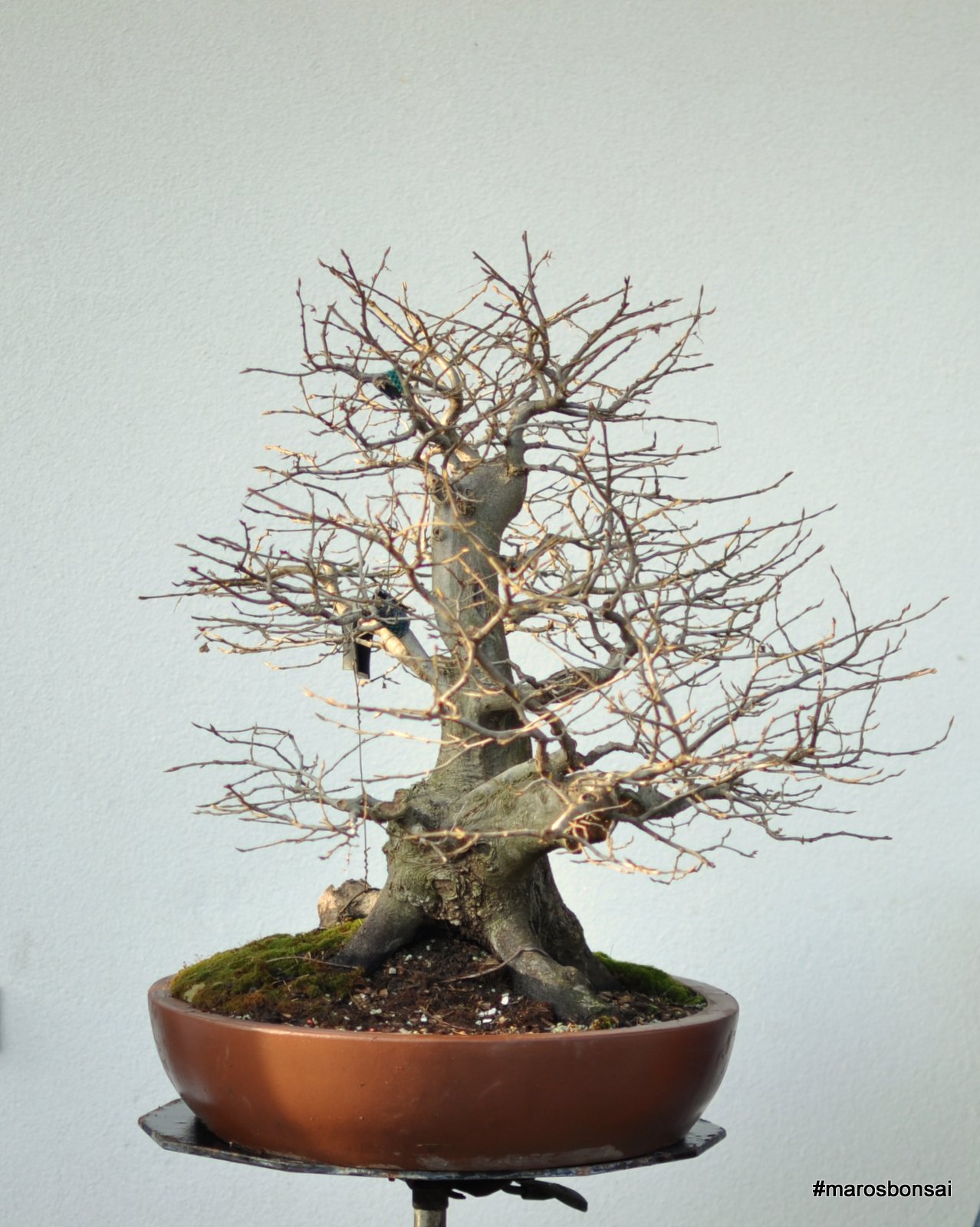 As I wrote already in some of my previous posts I would like to name some of my better trees. For this one I was using name which no longer fits this bonsai anymore. Now I think I will name it “The Yossarian”. Because bonsai hobby must be also fun, and Catch-22 is on of my favourite books. 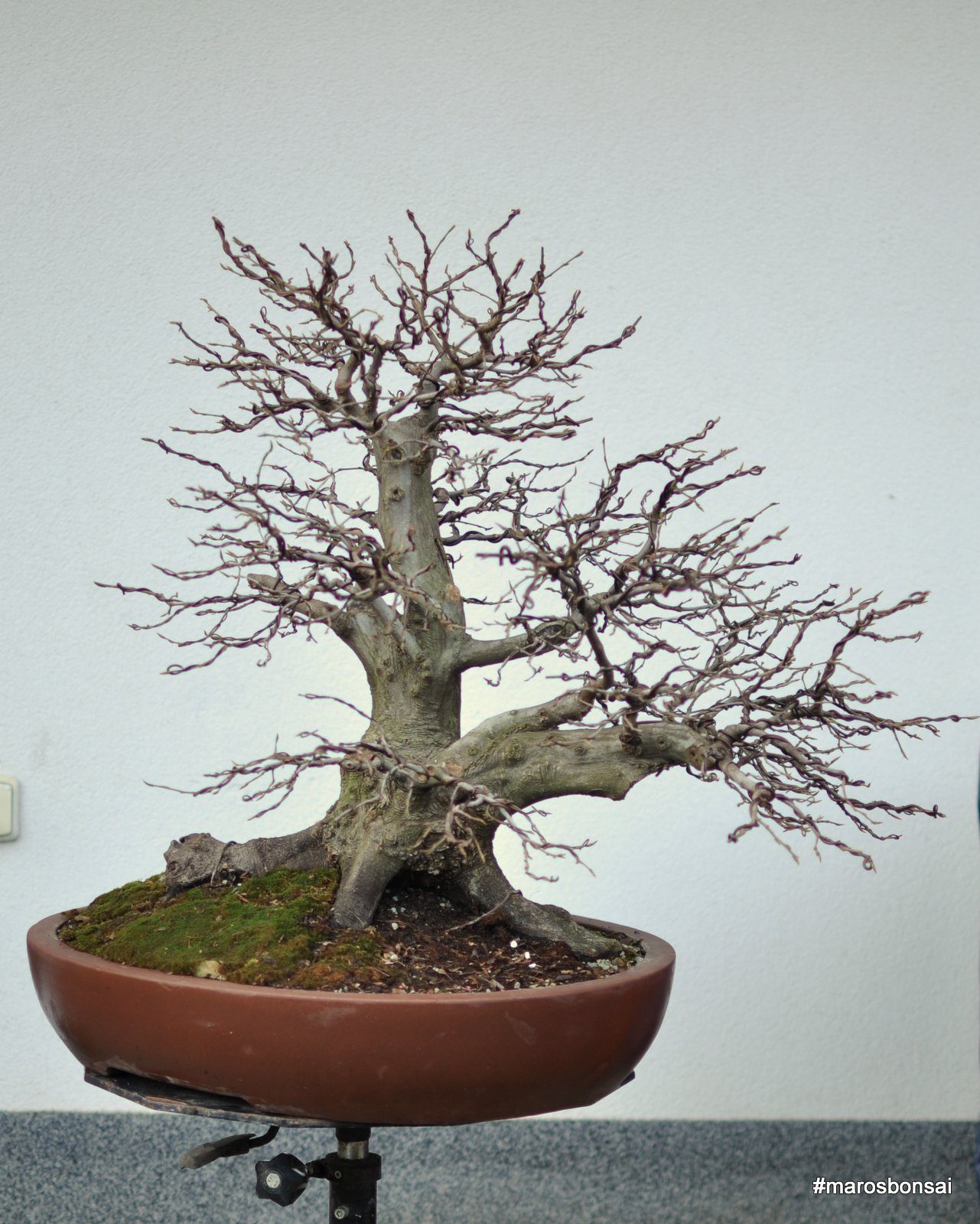 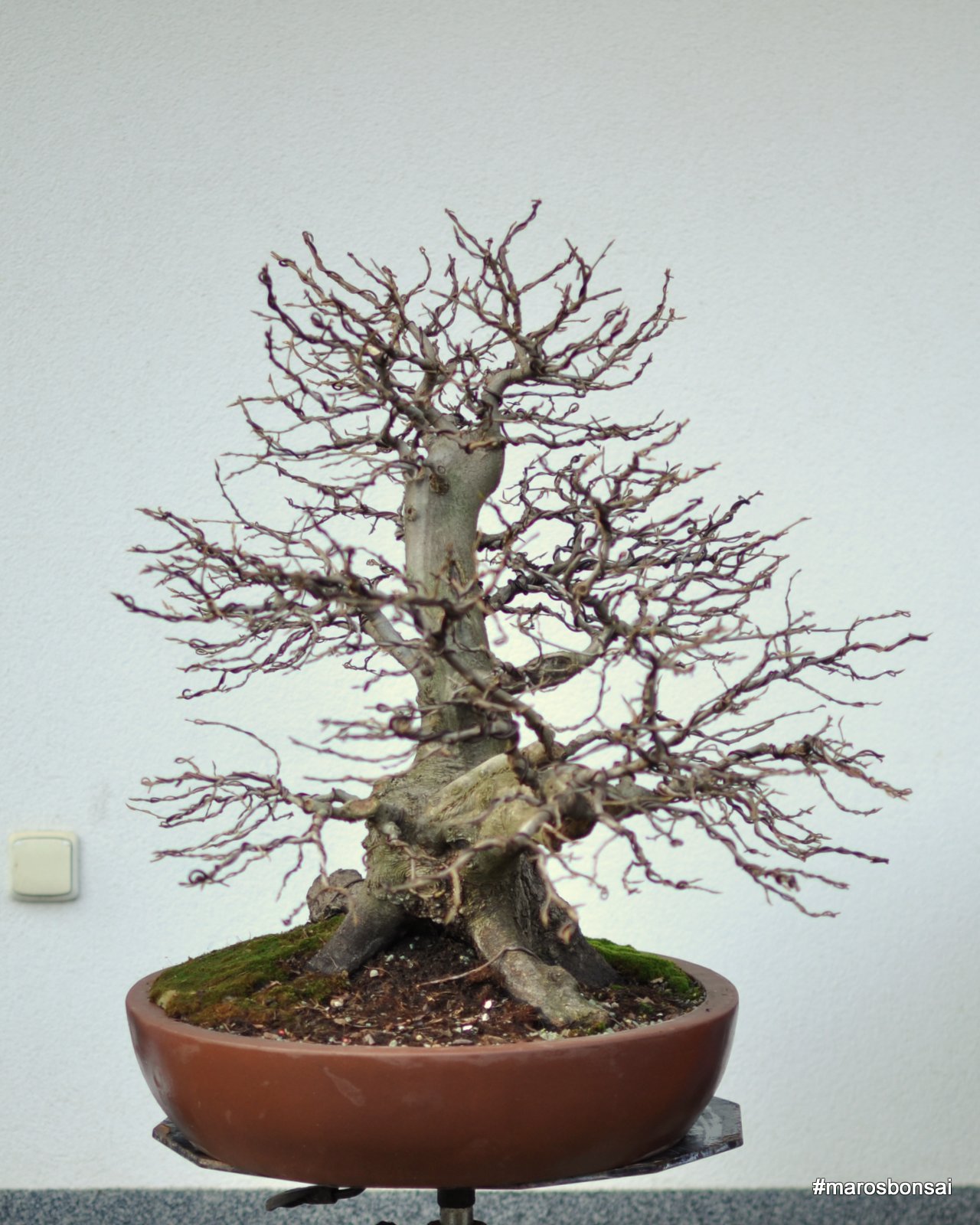 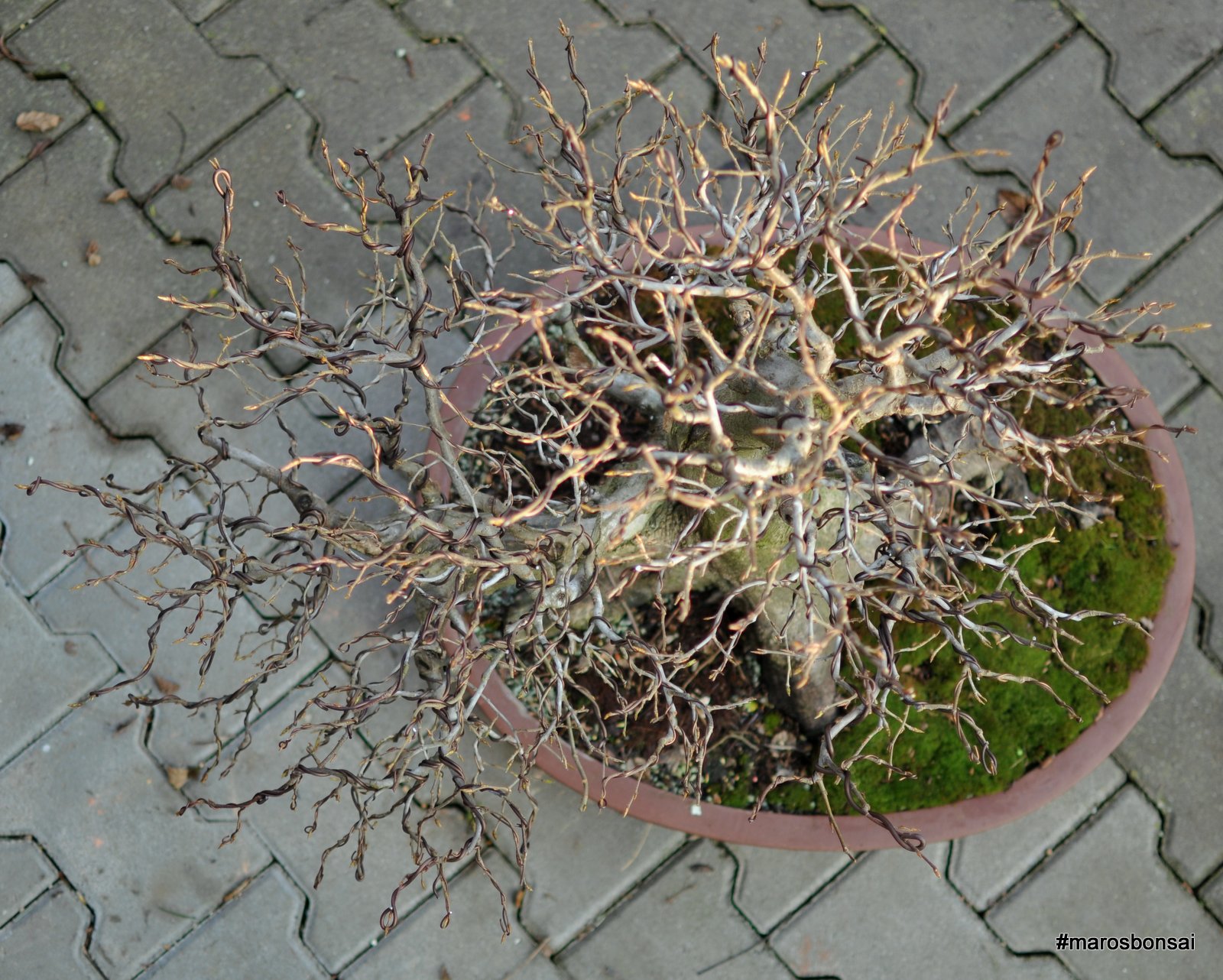 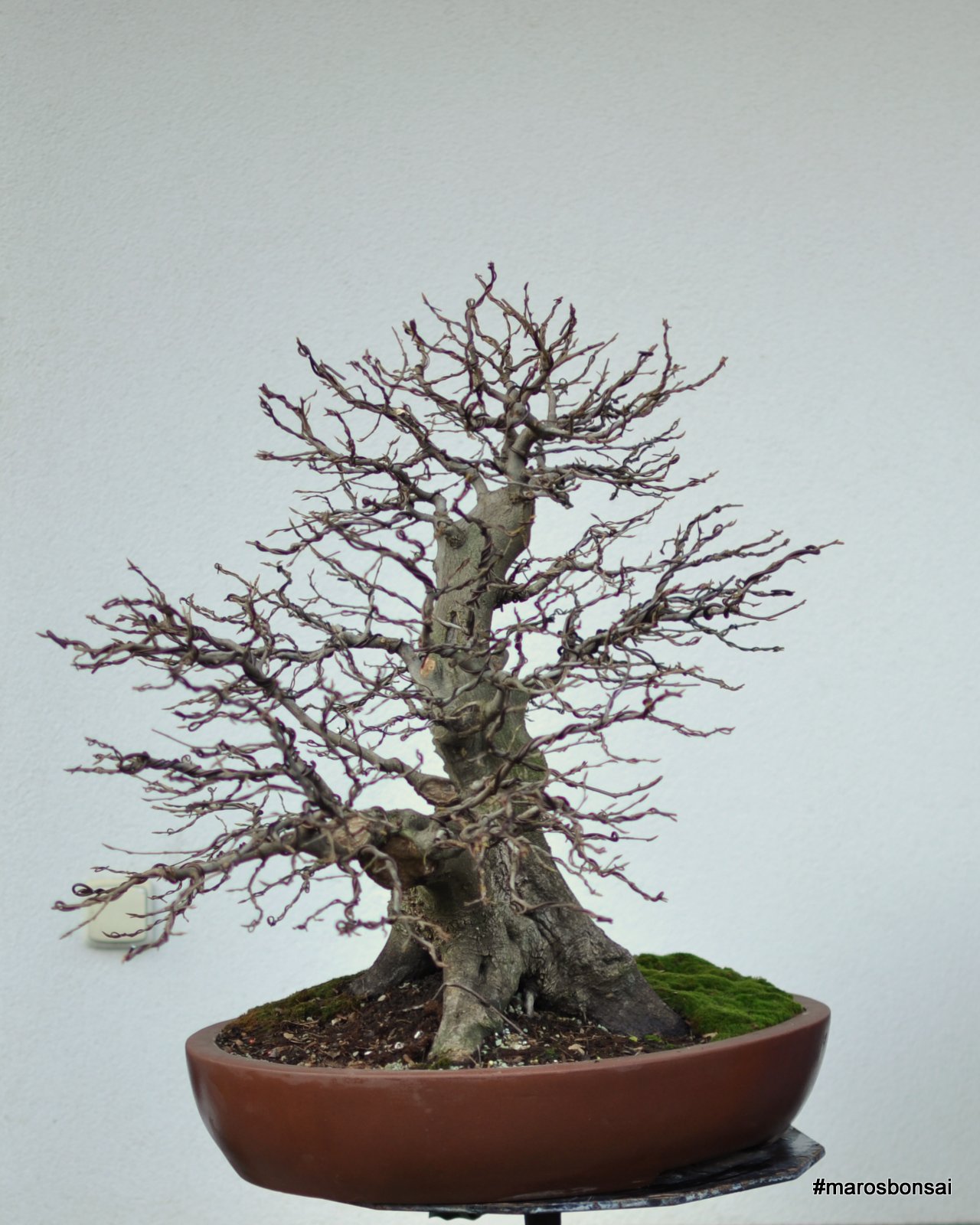 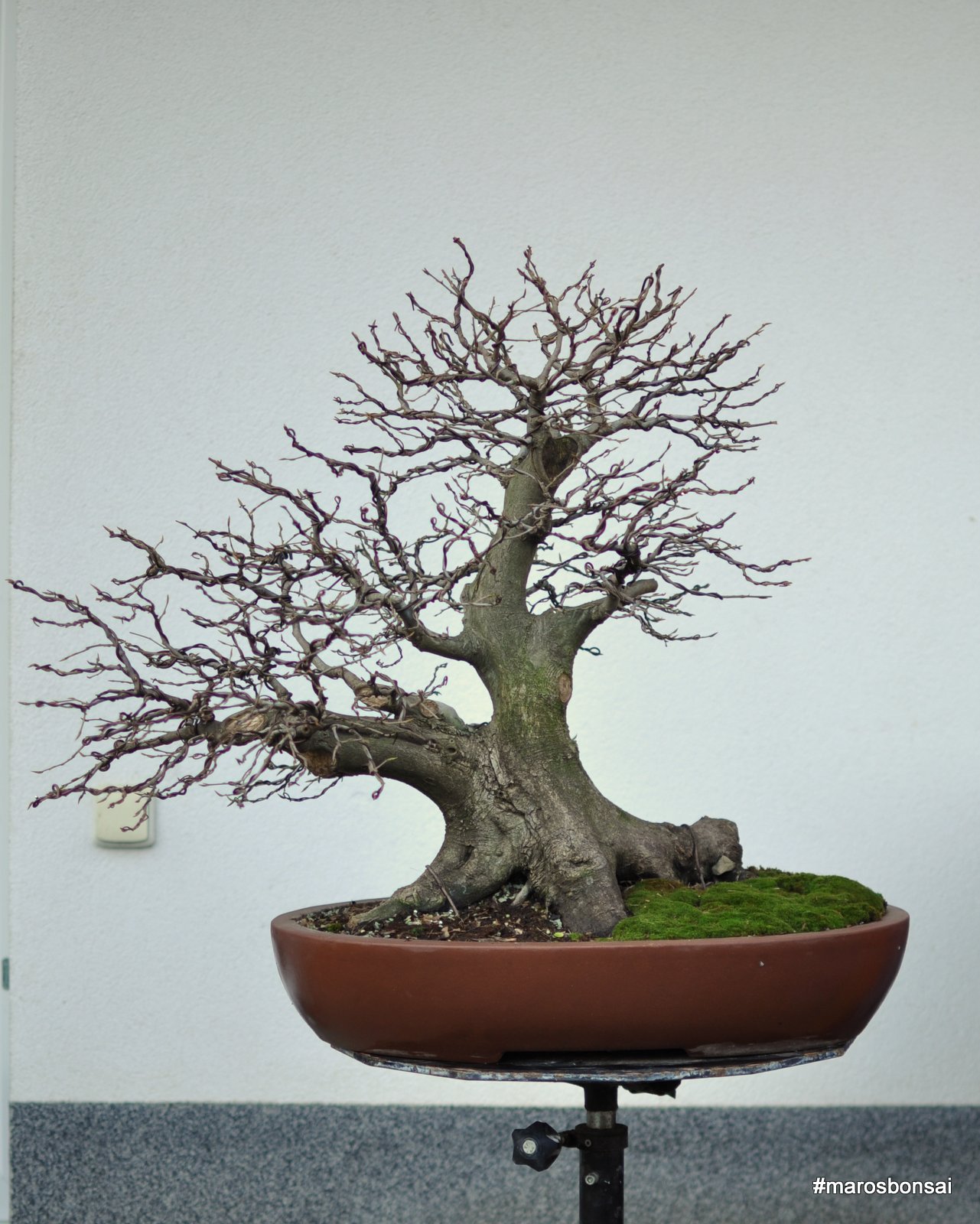 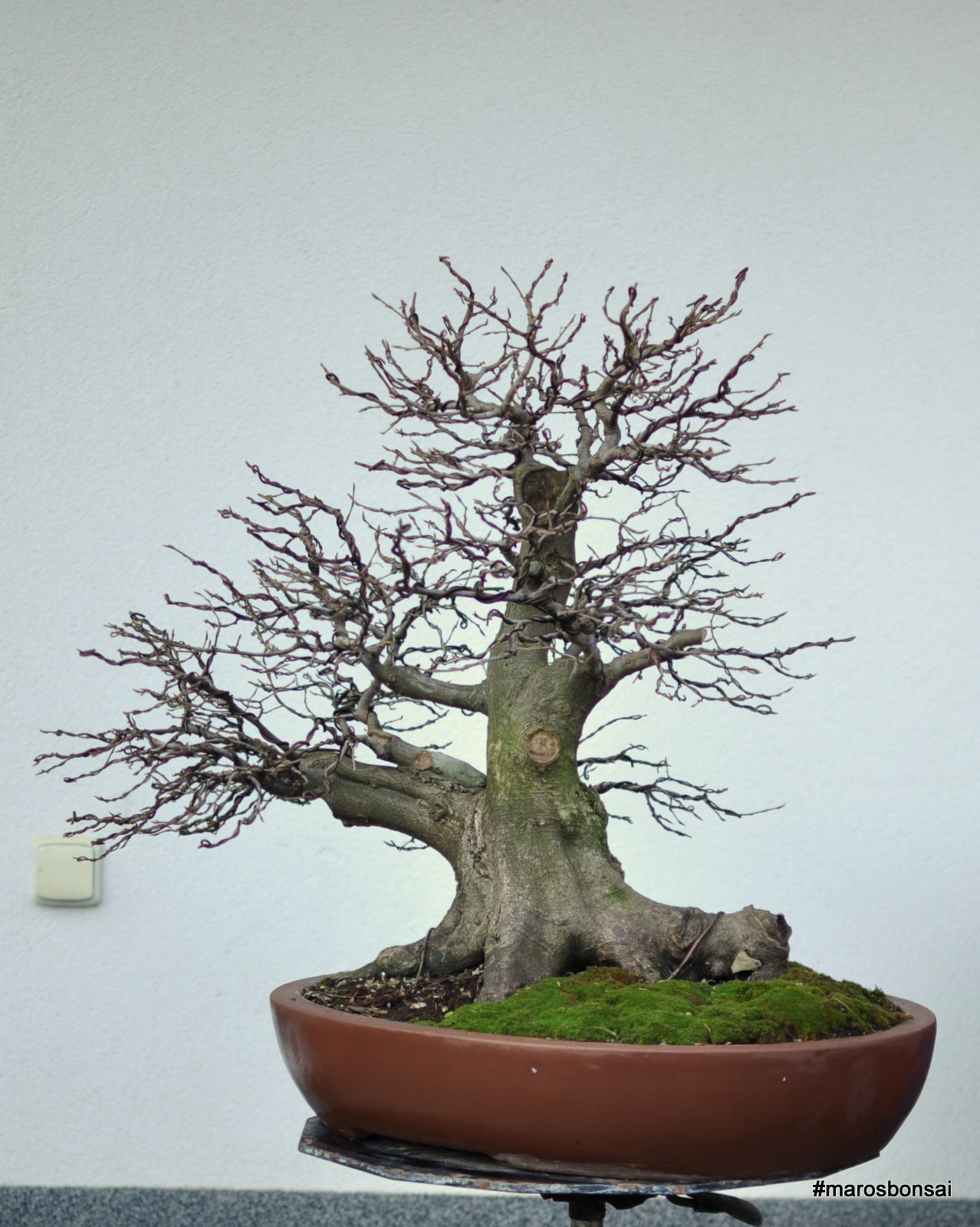 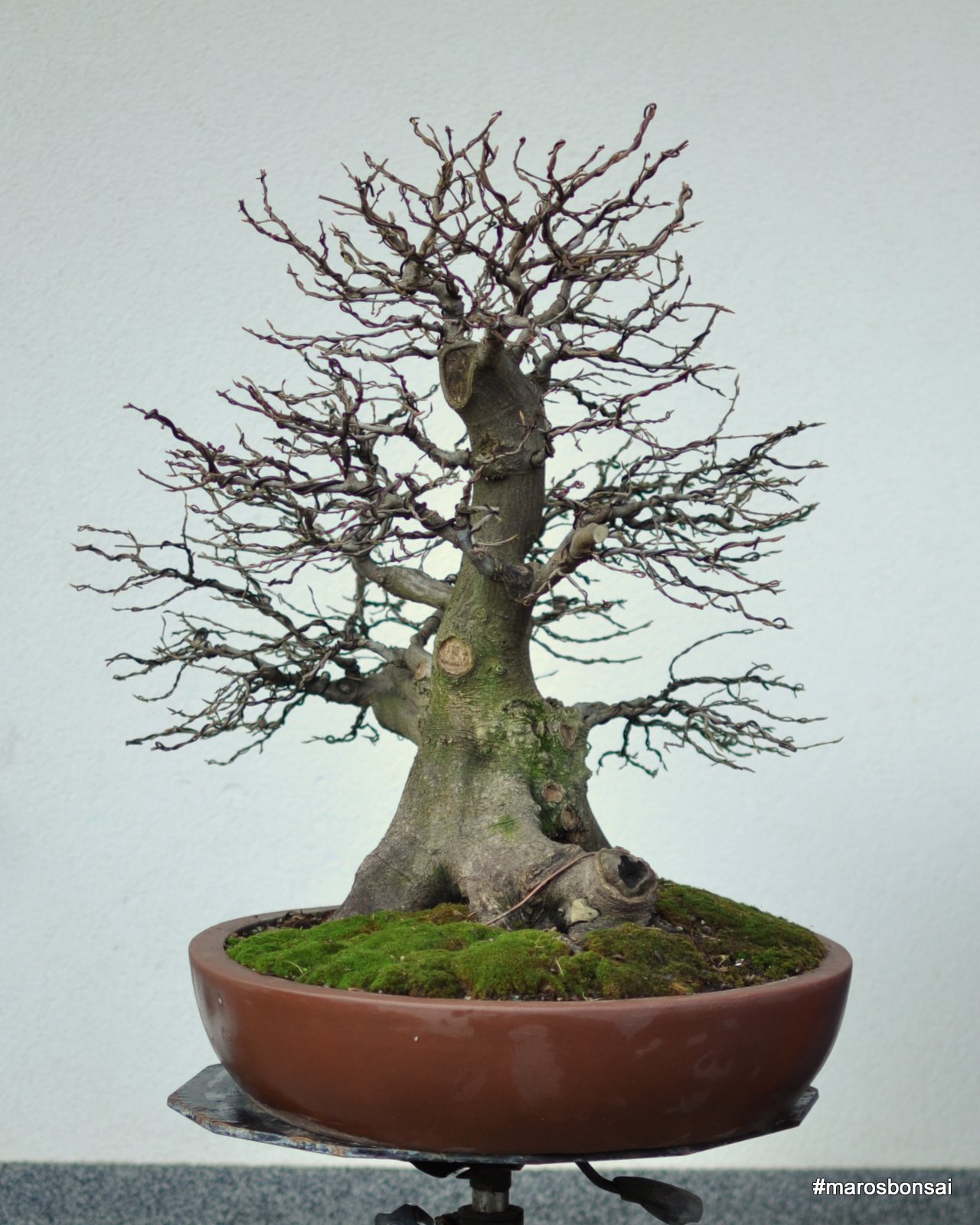 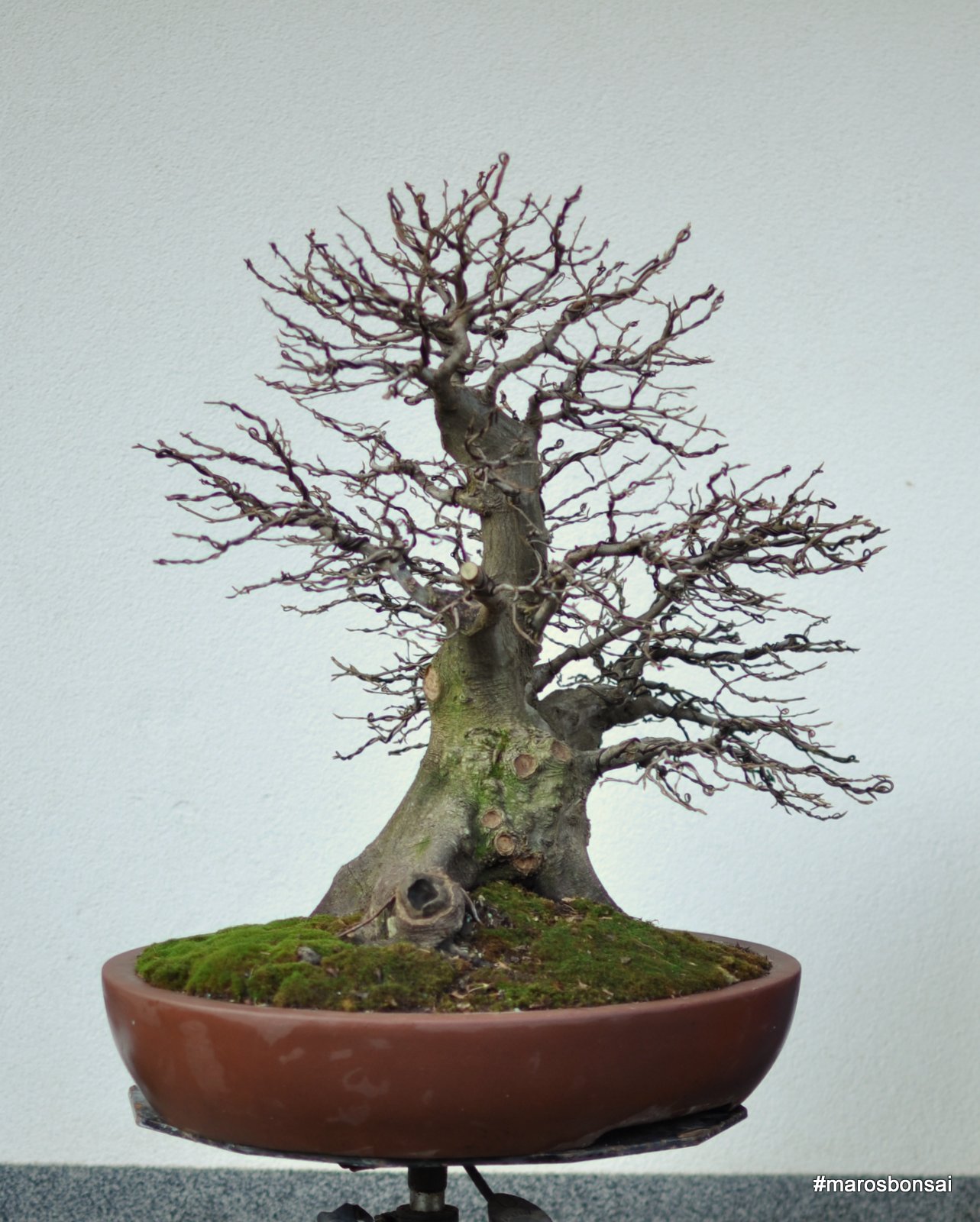 I like how much change this bonsai made during last 2 years, and generally from its collection from the wild. Looking on finished tree recently I was more than happy, I have to say. I like how it looks now, even if it looks too much like bonsai and not so much like the natural tree. Or it is only my actual feeling?
I will see how it will look like with leaves on, and than later in next season. But I can imagine, it will look even better after few more seasons, when branch structure will be much more refined and the tree will have better 'mochikomi'. 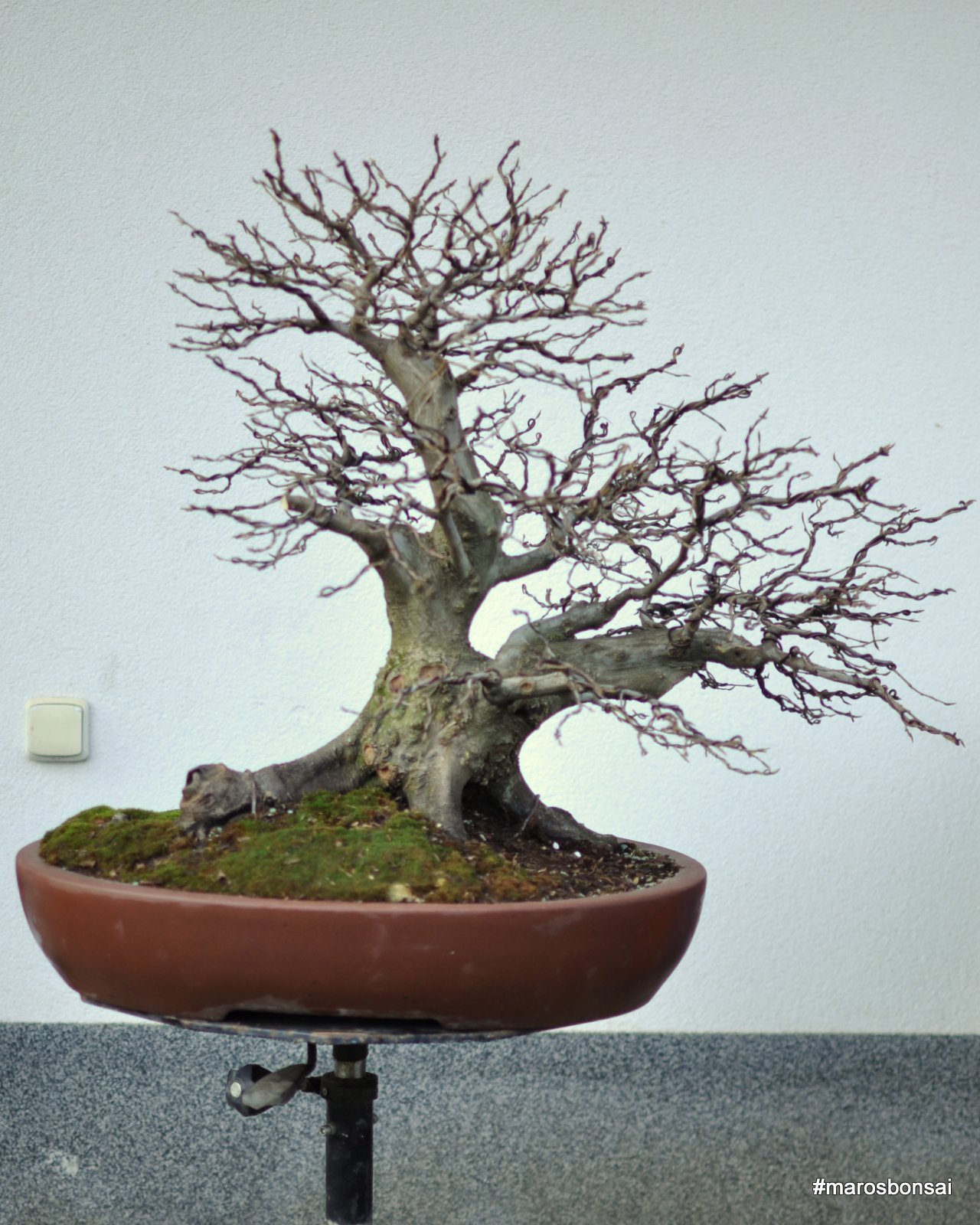 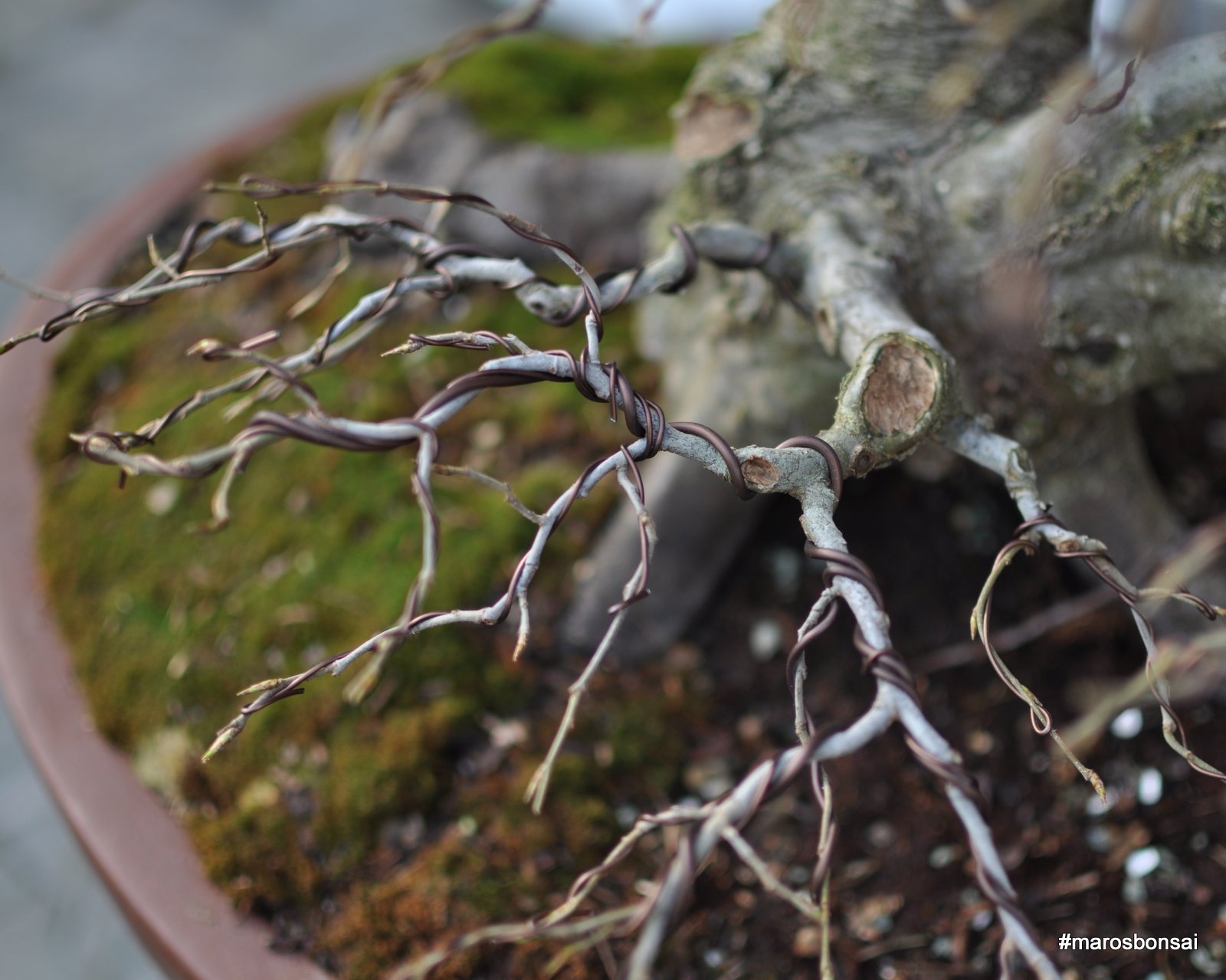 When working with it this week, I was thinking about scars on the branches and I think about drill them and connect holes together, may be this way the tree will look older and more natural. I will think about it during the season and may be start to work on it. 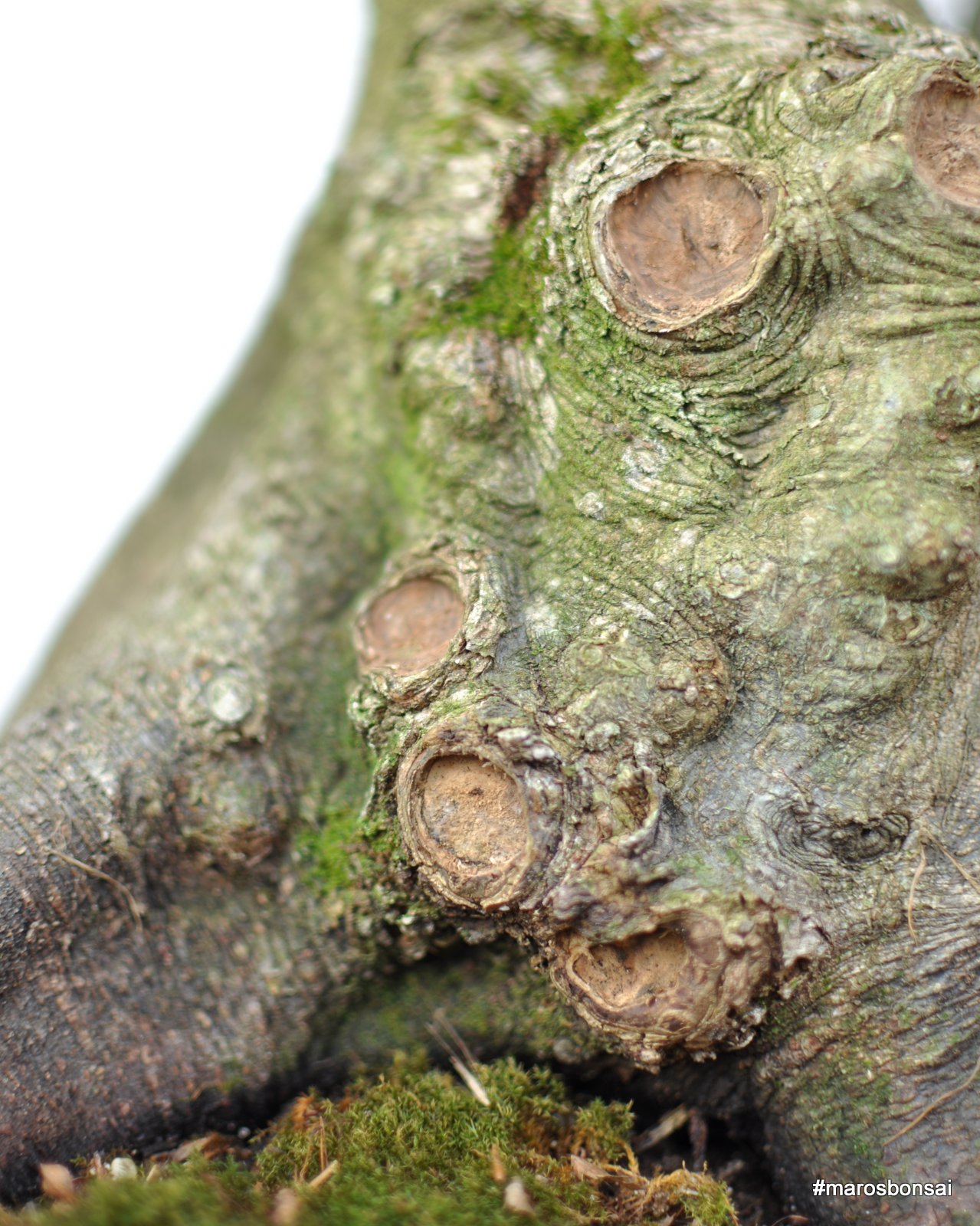 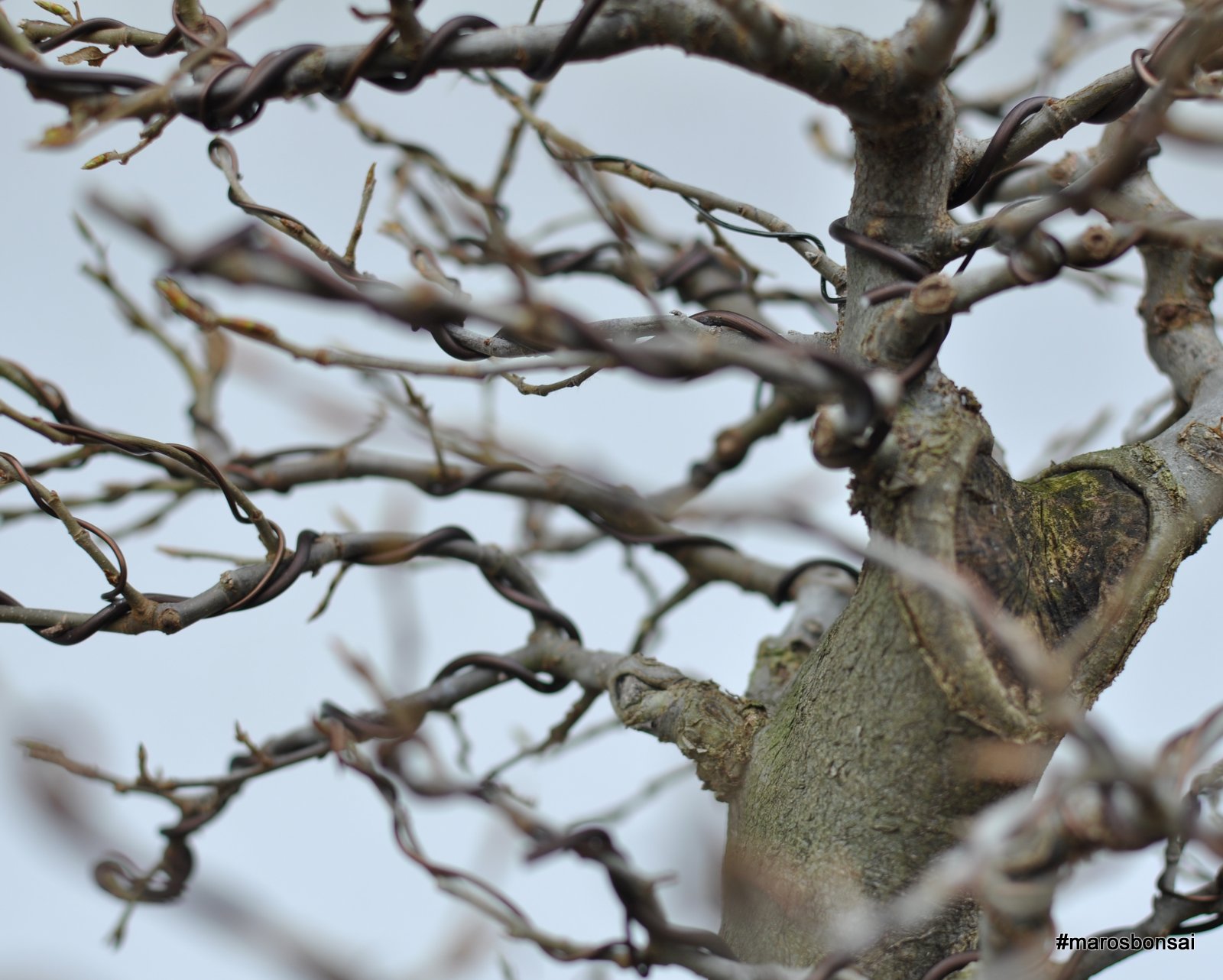 When potting this bonsai into pot last year there was problem of getting all roots below ground level. Mainly, because of larger roots are curved and their shape did not allow to do it. So, one of the major roots must have stayed over the ground level. After some time I took Dremel and worked it a bit. Edited it with flame torch and steel brush, and so on. Now it looks good to me. We will see how it will look like after few more years of natural ageing process.